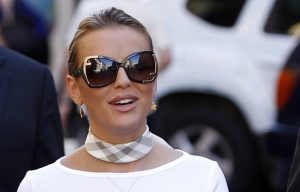 In this July 30, 2013 photo, Francesca Pascale, the girlfriend of Italian former Premier Silvio Berlusconi, strolls near his residence in Rome. In an interview published Wednesday, Sept. 25, 2013, in the Italian edition of Vanity Fair, Pascale, 28, described two years of pain and jealousy as Berlusconi, 76, responded to the failure of his second marriage by throwing lavish parties for young women. She says she courted the 76-year-old former premier relentlessly until he finally surrendered. (AP Photo/Riccardo De Luca)