Lele Mora who in life had more in common with Zero MOstel in the Producers than his appearance, and is memorably on tape as gleefully having some mussolini fascist songs and speeches on his phone. 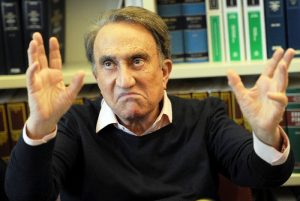 Emilio Fede, thankfully retired and out to pasture,  He describes himself as a journalist.

Emilio Fede, NIcole Minetti and Lele Mora – the three stooges of Berlo’s reign have been again found guilty in 2 grade of procuring prostitutes for Berlo at Arcore.   Berlo himself was absolved earlier this year of knowing that Ruby was a minor and not the cousin of Pres Mubarak – but these three knew – although apparently Fede didnt know she was a minor – which was strange as he was a judge on a beauty contest where her age was clearly stated and known.   Any road up – they have had their sentences reduced on appeal – to 4, 3 and 6 years.

Mora is already in prison for fraudulent bankruptcy and being the Italian Simon Cowell but without the ability to spot any talent.    Fede is a pensioner so wont go to prison or be punished in any way.  nicole Minetti now has a sentence conveniently short so she can opt for social services – but in reality she’s going on Im a Celebrity get me out of here…. They have promised to appeal to high court.