I have a fundamental problem with regard to the Italian democracy.

Most italians I know wax lyrical about the Italian constitution and then dont know what it says.  Nor that it is widely ignored until someone wants to change it, and then it becomes all important.

Yesteday the Senate decided to save the saggy old one’s leathery orange skin by not allowing the phone interceptions of his calls to  his call girls for the case of Olgettine 3.  The one where he pays the girls to lie and perverts the course of justice.  Yeah, that one – the one where he buys witnesses and pays them lots of dosh to turn state evidence to get him off his miserable hook.  The one where he threatens people to say the right thing in court.

Anyway the senate decided not to allow the proof of these serious charges to be admissible.  By secret ballot.  And someone voted to save his ancient arse.   Immediately the accusations flew – the M5S accuse the PD who accuse the M5S – but nobody addresses the fundamental issue.   Why, in a democracy, is a secret vote allowed at all?  These overpaid leeches are the electorates representatives who are meant to be expressing the will of their voters.  Why must they do it secretly?  I cannot know how my elected representative voted on an important issue, or if he voted at all.    And yet, nobody seems remotely interested in ending this patent abuse of power.   End the secret vote or end parliamentary immunity.  Its pretty obvious that you cant have both. 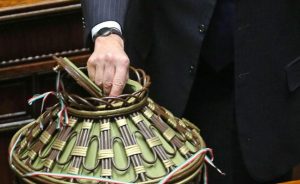