He’s been a very naughty boy…

The Pope resigns  – has given us one of the most revisionist histories in a short time as I have ever seen.  IN less than 24 hours the Vatican has managed to rewrite history in its entirety and find lots of men and women in costumes to say that it is all perfectly normal for a man appointed by god to be his representative on earth to go and have a lie down when he doesnt feel up to it.   Unlike his predecessor of course who famously said that Jesus didnt get down from the cross did he?  And that’s a good point –   I mean, it wasnt much of a trick was it?  David Copperfield would manage to get down, despite big rusty nails in his hands and feet, 2 padlocks and straitjacket , and then reappear about 200 years away in the blink of a an eye.  And that’s magic.!

More to the point is the expense.  The Italian state – which isnt in the best of health lately – has to pay for moving the pope about, planes, helicopters and all that – in fact everything when he isnt in ‘da house.   Now with less than a months notice theyre going to have to pay for lots of men in fancy dress to come and sit in the Sistine chapel for a few hours playing Razzle on their ipads.  Its very irresponsible – added to which there will be people who have already booked their visits to the Chapel online for the conclave.  Will they get rebates? Can they sue?

And then theres his secretive planning – not very papal.  His brother knew for months apparently.  The nuns in a little closed convent on a hill in the Vatican got thrown out of  house and cell and now Ratty’s going to live there.   ANd never come out.  Why? Is he afraid of extradition or something?   And while we’re on it, dont you suspect he vatican is a bit like how Shangrila is always portrayed in films – a little hole in the rock and badoom theres a land stretching as far as the eye can see which doesnt even show up on Google Earth.   I think the Vatican is the same.  Yesterday Rai treated us to a news piece about the peace which Ratty will have in his retirement of prayer – the place is bleedin huge – football pitches of lawn and convents, monasteries and woods, waterfalls, rainforest, the place is endless.

Then on top of all this pathetic attempt to keep Steptoe off the front pages, the DOM Silvio asks a pretty girl at a public meeting how many times she comes.  Twice. and then says her bum is an inviting proposition.  Meanwhile we have the only election in history where the Prime ministerial candidate for the right has completely disappeared. Totally.  Never on tv, never says anything.  occasionally we are told that Alfano went to Siena, or went to tea at a friends house  – and thats that.  Dom Steptoe is taking up all the airwaves.  Every single one with his daily rants and whinges.   Its looking grim folks, he’s gonna win. 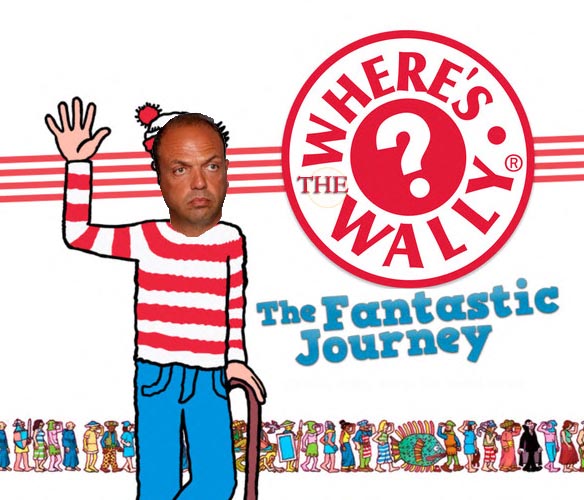