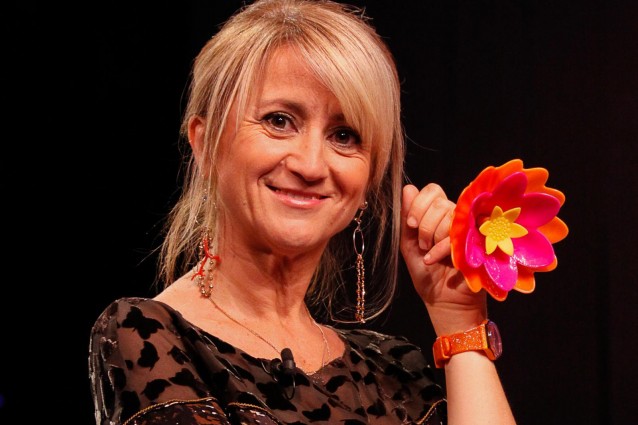 Luciana Littizzetto is the Italian Eddie Izzard – one of the very few comics who a) makes you laugh without doing a fart joke (bear in mind that in Italy we can watch Benny Hill on tv every day somewhere) and b) confronts ‘themes’.  This year, much to the chagrin of Berlusconi, she is hosting the songfest of San Remo, four days of mindless schlock which produces the ‘most Italian song’ of the year.  AS every French Eurovision entry has the words oiseaux and enfant, so San Remo produces 4 interminable evenings of pap music, and yet the country grinds to halt –  even though more grinding  is difficult, – and sits in their 14 millions in front of the goggle box to cheer on a reality show winner who alternately shouts and breathes heavily in front of a large orchestra before walking off with the gold palm tree.

But, this year its different – Luciana Littizzetto is not a leggy model who flashes her pubic tattoo at every opportunity (see Belen), not is she the 95 year old typical bewigged host )see Pippo Baudo.  She isnt even an exroyal with a desperate need for attention (Filiberto of Savoy) – she is a funny, political woman who only does Coop ads on the tv, and loves talking about the failings of men.

Last night her 6 minute monologue on San Valentines day was 2 minutes of why women love men – amusing and unthreatening, 2 minutes of why cant everyone love equally – civil rights for same sex couples and 2 minutes on smashing your wife in the face is not love, its being a bastard.   This is why Luciana Littizzetto should be elected Pope immediately and/or president.  SHe is one of the few saving graces of Italy at the moment, and that is probably why Berlusconi cant stand her.

Talking of which the cretin Steptoe has anounced that paying 50 million euro bribes is perfectly normal in business and we should get over it – that is 50 million of public money to a bloke in India.  Thankfully most Italians dont agree with drooling granpappy Silvio on this one, so with any luck he may just have shot himself in the foot.  Unlike Pistorius, who having no feet shot his girlfriend instead. 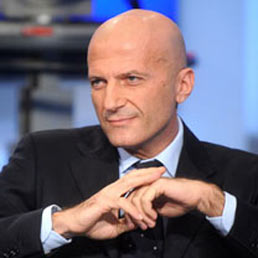 The yukky Minzolini – see past posts – was head of Rai1 and is now a PDL candidate so far up Silvio he could probably remove his appendix from the inside, has been absolved of using the RAI (our money BBC like tv thing) credit cards for 30 grands worth of personal shopping.  Why? Because it wasnt written anywhere that he couldnt spend licence payers money buying his wife jewellery, or going on holiday.   So, apparently, he was only doing what he would assume he could get away with.  And this time the judges agree – they presumably have judiciary credit cards they can use – magistrate cards?   Now he wants his job back …