Yesterday would have been Mussolini’s birthday, and to celebrate it Matteo Salvini deliberately quoted the fascist leader, ‘Tanto nemici, tanto onore’ – many enemies, much honour.     Salvini has said that the upsurge in racist attacks since he was elected to government is fake news.  In the last week two people, one a five year old girl, have been shot with compressed air rifles – ‘I was aiming for a pigeon’ was the excuse.  Near Palermo a Senegalese man was beaten up for being a ‘dirty black’.   In Latina an immigrant was murdered.   Salvini says it isnt true and Italians are all good people.    Most of them are.  – He says there is no racism and the only crimes are those committed by immigrants.   Perhaps worth pointing out that nearly 100% of murders in Italy are committed by Italians.

Here’s a placard from the last Lega meeting – which reads, Salvini, Ive been waiting for you….’

Things will get worse before they get better, and to prove it this is a minister for the family, he’s called Fontana – a Lega MP and deeply worrying.   He has just announced that the lately passed law recognising the children of all couples – gay, straight and otherwise, will be rescinded, and that he will refuse to recognise children from families without a mother and a father.   It is unlikely to happen, but worrying that a man like that can hold a ministerial post. 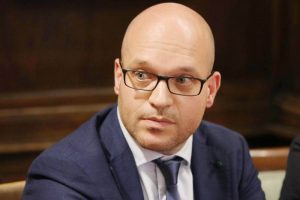 I hope the M5S comes to their collective senses quickly and stops this headlong rush into madness.