A fountain of sanctimony 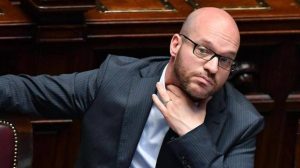 He may only have one daughter with a pretty standard name,  but in many respects Lorenzo Fontana is the Italian answer to Jacob Rees Mogg.  An ultracatholic, spewing hatred and spite, Fontana yesterday announced that as Minister for the Family (A Rees Moggian ministry if ever there was),  it was incumbent on the government to abolish the laws on racial hatred – as they were being used to stop self expression.  This man is a big fan of Trump, Marie Le Pen and Putin.   He wants the Italians to have more children, (although he has only managed one), to counteract the insidious Muslim invasion.    He is a big fan of the Theory of Gender (gender feminism)- an invention of  the Opus Dei in the 90’s which is anti feminist, anti lgbt, anti equality.  I suspect there are people in the Vatican who have Fontana’s picture tucked under their pillows.

Salvini initially, obviously with his guard down, said it was a good idea- but later backtracked to say it wasnt a priority.  The M5S and the PM Conte, to their credit, immediately slapped down the idea.