A strange way to celebrate an anniversary 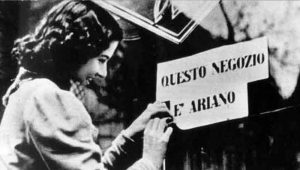 Its 80 years since Italy passed the racial laws against the Jews and other minorities.  To celebrate Salvini has decided to introduce a decree which makes ‘ethnic’ shops shut at 9pm because, he says, they are centres of drug dealing.   It’s going to be  a short step to having these shops display a logo in the window to show their ethnicity.

Added to this we have the arrest of mayor in the south of Italy who had welcomed migrants and revitalised his little town – the migrants are to be forcibly removed.

And as a finishing touch, non Italians are being excluded from reduced cost school meals in Lodi and must pay the full fees, because they are foreigners.

If Italians are happy for this to happen, and stand by and watch as they did 80 years ago, then it is already too late.