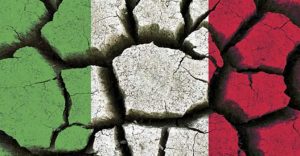 Brexit may be the car crash we all expected, but in Italy we’re in the midst of a multi car pileup that shows no sign of ending.   There are the gobbets of news which make you despair:

One of the ministers of the family telling us that global warming is Satan’s work,  Di Maio getting lynched by the media because his dad put up a shed,  Di Maio getting lynched by the media for a collapsible swimming pool that needs no planning permission,  and the unending saga of the budget which has yet to be passed.   The budget, which promised to exceed public spending by more than Europe wanted, has been tweaked, diluted and generally rewritten to soften the European stance against the ‘populist’ government.  All the campaign pledges are being watered down because the EU ministers don’t like them, but they are allowing Macron to go to 3% overspend, while Italy must remain within 2%.

Meanwhile Salvini eats more pies, and launches diatribes against all and sundry.  The latest is that the Famiglia Cristiana is, according to him, ‘of the ultraleft’.  If he really thinks that, it shows how far to the right he actually is.   He still outplays the M5S and lets Berlusconi think that there is a possibility of a right wing government.  The M5S lose percentage points daily, but salvini has reached the giddy heights of 50% approval – and he therefore thinks he may be able to go it alone – all on the basis of a bit of xenophobia and bullying.

In the meantime, Italy continues its downward path, falling into further decay.  It’s difficult to grasp the dire state of Europe with or without Great Britain unless you live in it daily – but the unending litany of despair on the news and in the papers, is creating a deeply unhappy country, whose people, as is their historical privilege, hide their heads in the sand and discuss the virtues of panettone.

The main plank of Salvini’s policy was the Security law – which has been passed, and now punishes non Italians on a variety of levels, especially those who happen to be a different colour.  Any crime with a non-Italian perpetrator has wall to wall tv coverage, while Italians really do get away with murder.  It is a curious thing, to live through the rise of a putative dictatorship that our generation has only read about.  The parallels with Mussolini and the rise of fascism are impossible to ignore, but it seems hysterical to actually say the words.  Diatribes against foreigners, the press, the church, Europe, teachers et al all serve to reinforce the Salvini politics, and he now wants to stop the teaching of history in schools – a direct link to Italy’s past.  What he will dream up next is getting difficult to guess.  In this Trumpworld what would have been inconceivable a couple of years ago, now passes without comment.