The threat of an episode of Montalbano dealing with immigrants meant that Salvini took a break from eating all the pies to go on tv directly afterwards to refute anti immigrant accusations.   In the end it was a storm in teacup,  and Salvini used the moment to

a) slag off the French

b) agree that a comic who ‘invoked Satan’ 5 times during the shitfest of San Remo is indeed troubling, and we need to watch out for Satanic sects

c) revel in his 40+ % in the last regional elections 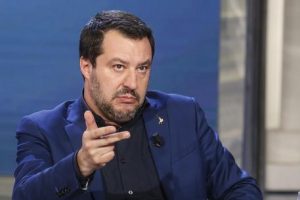 Di Maio (5 star deputy leader) is nowhere to be seen – which is unsurprising given their poor result in the regional election and the fact that they have no policy on anything much.  They dont want to finish the high speed rail tunnel between Lyons and Turin, which is over half way built, and the penalties for not finishing will cost more than finishing it, so its an idealogical problem.  Given that the calls for ‘honest honesty honesty’ seem to have been conveniently put in a drawer when it comes to whether they will vote for Salvini to be prosecuted over the migrant ship the Diciotto, it’s hard to see how a self respecting 5 star voter can support the wishy washy amateurism of the party.  (not a party but a movement).  They are still hopelessly outplayed by Salvini and his cabal, but waste no opportunity to slag off Macron and prepare for a rout at the European elections.  They and the Lega may not have a declared policy to get out of Europe, but they are doing all they can to make it fall apart.

Berlusconi on the other hand has been on his channels day time shows to lament that the Italians are ‘out of their minds – only 5 or 6 in every 100 vote for me’.