Norman Wisdom to head the IMF

While Salvini eats more pies and pitches himself headlong into the European election campaign by calling France a colonial despot,  his partiality for dressing up in uniforms and blackshirts isn’t going unnoticed.  There’s been a bit of an outcry over his choice of wearing a police jacket of late – even though he is Home Office Minister he has no right to don the uniform of the police (nor the fire brigade) and lots of people arent taking it lying down.  Of course it’s a nice distraction from his policies, which he defends in a bullish, if not bullying, way that would endear him to The Donald.

Meanwhile Di Maio has nominated an 84 year comic actor – Banfi (below) – as ambassador to UNESCO – which is like having Benny HIll as head of English Heritage.   Banfi says he thoroughly deserves the post, and will now learn what it’s about.  Failing any useful input he hopes he can bring a smile to meetings.   Di Maio claims this as a huge success ‘for the people’ – we have had enough of qualified people, enough of experts and people with degrees – what we actually want, we are told, is to be governed by people who know nothing about anything.   There the government is succeeding. 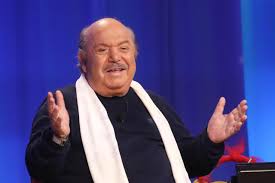