Reasons to be cheerful (part Diciotti) 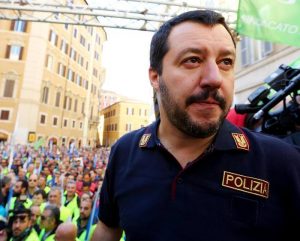 You may remember a ship called the Diciotti which Salvini denied permission to dock in Catania, thronged as it was with migrants who had been saved at sea.  He was putatively indicted for hostage taking and denial of human rights.  Of course being an MP the rest of the club have to vote as to whether he should be allowed to stand trial, and here the M5S had a problem.  They have consistently said, since their founding, that nothing should get in the way of the judicial process, most of all the mere fact that you are an MP.   And it would appear that most of the M5S thought that Salvini should be brought to court.   But that makes governments tremble, and as the date for the vote approached the M5S started a very complicated manouvre to keep the alliance intact.  It seemed doomed to miserable failure until at the weekend it was announced that if Salvini were brought to trial, then Di Maio and Conte (the PM) would also be indicted as responsible by association.   It knocked a few vocal vacillators off the fence, but the M5S saved the day by abdicating all responsibility and announcing an online vote (the text of which was changed twice) by 70000 or so M5S subscribers.   It was close – a bit less close than the Brexit vote, but close enough to ask whether the wording of the vote might have made a difference.  You see, the vote ran as follows:  if you voted yes (thinking to indict Salvini) you were actually voting no, and if you voted no (free the Salvini one), you were actually voting yes.  So a completely typical political fudge which allows the Grillini to say that they were acting in a truly democratic fashion.

While Salvini dons a black shirt in rejoicing,  his henchmen want to pass a law which requires at least one in three songs played on the radio to be Italian.   As if Italian radio could be worse than it already is.