There’s a mystery in Italy to Italian bread, and Ive heard so many reasons behind it, it’s up there with Area 51 as a conspiracy.  To any seasoned breadaholic from another country, trying to find a decent wholemeal loaf in Italy is like searching for the Templar treasure.  Lots of bready products emblazon their labels with ‘integrale’ which on closer inspection is actually white refined flour with a few floor sweepings chucked back into the mix – the famous ‘crusca’.  This isn’t wholemeal flour at all, but maxi processed white 00 which is basically then coloured brown.  To make matters worse, it’s entirely legal.

There’s a history to this, and as usual we need to blame Mussolini.  After he initiated the ‘battle for grain’ in 1925, in an attempt to make Italy self sufficient, he spent an inordinate amount of time belittling the rich who ate white bread.  Black bread was fine, he thundered from his balcony, and given the paucity of wheat grain, it was also fine to knock out a bloomer loaf with flour from lentils, chickpeas or rice.  The war saw bread grow increasingly black and it wasnt until the 60’s boom that white bread became common again – and thus desirable.  Buy a Lambretta and eat white bread: a mantra which has stuck in the minds of Italians.  New laws on flour in the 60’s and 90’s did all they could to demonise black bread and laud the purity of ice white pagnotte.

Now we have a set of laws that (since 2003) define the word ‘integrale’ as either being made with wholemeal flour, ie milled as wholemeal, (15% bran)  or being made with white flour with a minimum 2.5% bran added.  To muddle you further, using 40%  wholemeal flour and 60% white flour, your loaf still results as integrale, even though it could be only, at that point, 1% wholemeal.   To know how integrale is your bread you need to ignore the publicity on the front and read the list of ingredients on the back, usually with the aid of a magnifying glass.   This is because the word ‘integrale’ is deemed to mean a characteristic of the product and not the ingredients themselves.  A typical Italian fudge.

In April 2017 we were promised a decree within 12 months to stop the false ‘integrale’ but what with elections and more voteworthy platitudes to utter, it’s all been forgotten.  Bear in mind that a bit of melba toast – the fetta biscottata – to be classed as integrale can contain only 6.8% fibre, while a true ‘integrale’ would be 98% fibre.   Someone somewhere is making a large amount of money out of duping the public.  You only have to look at the latest tv ads for a particular firm with a rustic water wheel to know who the big earners are. 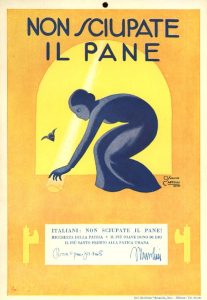