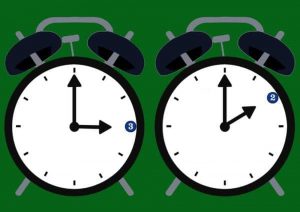 The EU bigwigs have decided that by 2021 all member countries can decide if they want to have permanent winter time or summer time.  Apparently this is due to the fervent desire of its 500 million inhabitants.   There was an online questionnaire about this last summer, completed by 7 million, of which over 4 million were Germans.  The result of this excercise in democracy is that each country now has to decide whether to stay in GMT or have its summer time all year round.  Obviously the countries to the north will plump for one, while the Mediterranean countries will go for the other,  though there is the distinct possibility that Belgium, Holland and Luxembourg will opt for different ones, leading to a crazed clock adjustment as you travel between countries.

No doubt the leavers are chuckling to themselves, but if the deal is delayed, the UK will also be drawn into this new law, as it is to be decided in May.