Suddenly I seem to have time on my hands, and antibacterial gel.

It’s day two of the national lockdown thanks to Covid19, although not alot seems to have changed here in the south of Sicily.  There are fewer cars, and people keep their distance, but there isnt the tumbleweed blowing down the Corso as we were lead to believe.   You just spend more time in queues.

Yesterday I tried to go to Lidl – only 10 people in at one time, which meant a snake like queue of despondent trolleys around the car park.   On to the Agenzia dell’Entrate, where we werent even allowed in.  This is an office about the size of a football pitch, but we were kept outside while a gloved hand emerged from the door to demand the documents which needed stamping.  40 minutes on, and they were returned, without said stamp.  I need to go back on Thursday apparently.  So much for this staying at home lark.

The famous ‘indietrologia’ of the Italians is thriving.  A metre isnt enough, a lady informed me yesterday.  Apparently its 4.5 metres, and the virus lives in the air for 30 minutes.    All this to keep at bay an American military virus, which unaccountably they decided to develop in  China, and then let loose on the world.

The saddest part of the day was watching the queen of daytime tv, Barbara D’Urso tell us we are her friends. 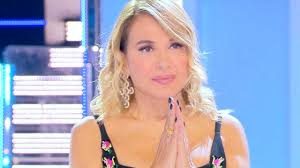 La D’Urso as she is known, 62 years old and a self confessed journalist,  is the turn to gal for Channel 5 viewers (and Berlusconi himself).   After her last interview with him, the union of journalists asked that she not be described  as a journalist because it was embarrassing for the rest of the profession – or words to that effect.

Anyway, La D’Urso appears daily on our tellys,  with more vaseline rubbed on the lens than Joan Collins would countenance.   She moves us with barely credible tales of woe, excites us with Hello snaps of celebrities and dispenses her big sisterly advice to all and sundry.   We must wash our hands.  Friends, because you are my friends, we are one big family – act responsibly .  She goes to work, she assures us, because she wants to be with us in these dark times.   Even la D’Urso has lost her studio audience thanks to the virus, which means a constant out of focus close up.   Its like watching Piers Morgan through a sock.

So that was day one.   Back to purdah and see what day two will bring.