The miracle of San Gennaro didnt happen yesterday.  Consternation and gnashing of teeth in Naples and beyond.  The December ‘miracle’ is relatively new – it was instituted after the eruption of Vesuvius in 1631 when the saint stopped the lava flow short of Naples.    It’s the ‘civil’ miracle, as opposed the one on September 19th which is his saints day, or the other one in May when they take his statue for a walk.  For the rest of the year the reliquary is locked in a safe and may or may not melt, unbeknownst to all.   Usually the cardinal of Naples waves the glass phial around a bit while various old crones shout and blaspheme against the saint, and the substance therein turns to a liquid state.  This has being going on since  the time of Constantine the Great even though Gennaro didnt become a saint till 1586. 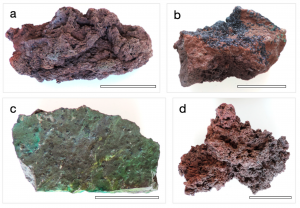 Whether you believe it or not, the liquefaction has a huge popular following.  The Church is a bit ambivalent about it all, saying that it doesnt need explanation if you believe.  The scientific explanation is that the blood is probably molesite – a mineral found in abundance around Vesuvius, and which, conveniently is reddish, a sort of dried blood colour: and which is a thixotrope – a pseudo plastic, which shows “reversible behaviour of certain gels that liquefy when they are shaken, stirred, or otherwise disturbed and reset after being allowed to stand”

None of this is allowed to interfere with the newspapers and tv programmes of today which are tolling sonorous warnings.

We are told that the lack of liquefaction is part of a long line of predictions that show that San Gennaro is protecting the Neapolitans and their city.  Just in the last 100 years the blood has failed to liquify on numerous occasions and it does seem prescient.

The  miracle didnt occur in 1939 or 1940 – the outbreak of WW2 and the entry of Italy into the war. Nor in 1943 when the Italians signed the armistice.   It didnt happen in 1973 and there was a cholera outbreak in Naples, nor did it happen in 1980 and there was the huge earthquake in Irpinia.  It seems almost prescient.

In 1939 the blood didnt liquify in September, two weeks after the outbreak of war,  in 1940 again in September, 3 months after Italy entered the war on Hitler’s side.  In Sept ’43 again no miracle, a week after the armistice was signed.    In Sept 73 nothing to show to the faithful, a full month after the cholera outbreak had started.  In 1980 the failure of the miracle preceded the earthquake by two months, but it all went smoothly three weeks afterwards, when thousands of Neapolitans were homeless and destitute.

Which leaves us with 2020.  The soothsayers have been quick to explain the lack of a miracle.  It’s Covid related apparently – even though May and September were zingers with the blood becoming liquid at lightning speed.   My favourite is that San Gennaro decided not to do his stuff yesterday because he’s sad that Maradona died – the two favourite saints of Naples joining forces in the al di la.

For the Neapolitans it doesnt matter what happens, it’s more about San Gennaro proving he’s watching over his followers, and much like the fable of the Castel d’Ovo (the Neapolitan equivalent of ravens at The Tower of London) it has become a comunity show of faith and resilience.    I prefer to remember that the miracle resolutely refused to happen when Pope John Paul II and Pope Benedict (Ratzinger) had a go – so obviously San Gennaro has some judgement in these matters.

However in the misogynist world of Naples, spare a thought of Saint Patrizia (another patron saint of the city) whose blood becomes liquid every Tuesday morning at 10am in her church on San Gregorio Armeno, and about whom nobody seems to give a fig