The 7th Circle of Hell 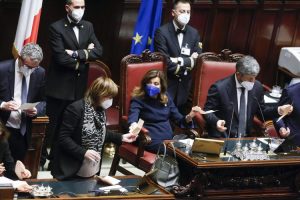 Another 2 votes yesterday, and more indecisive bickering.   Now we arrive at the 7th attempt which has only served to show that Salvini as a strategist  fails dismally.  He tried to propel Casellati to the top of the hustings yesterday, but she only got half the votes needed.   This could be because she is widely seen as a Berlusconi puppet, or that she takes Air Force one to do the shopping, or that she has spent hundreds of thousands of the state’s euros tarting up her house near Padova.  Salvini has tried to justify his move by saying he wants a female president, but it has merely led to the right wing coalition fracturing into a million pieces.

Meanwhile Mattarella gets more votes with each count.   It seems that his removal company has stalled the move from Palermo to Rome, presumably because if Mattarella wins a second term he wont need to rent a modest palazzo in the capital for the next four years.   And it would pave the way for Draghi to be a shoo-in in four years time.

Everybody knows that this was on the cards, but in a very Italian way, it seems to come as a huge surprise and there is a last minute rush to sort out the mess.   If they want Mattarella again, they could have  just said a year ago and all of this money and time could have been saved.  Instead we have endless interviews with negligible politicians who assume that the Italians ‘ are exhausted’.  I havent met an Italian who gives a monkey’s.   Only the politicans care, but living in their bubble assume the country is on tenterhooks while they jockey for future positions.

So today we will either get Mattarella again, or a new candidate will be produced from the hat like a rather mangy rabbit, and the 1009 will get agitated and start more mud slinging.  Watching them all trying to be statesmanlike is like watching the Prince Andrew interview on an endless loop.