The strange choices of the Italian electorate 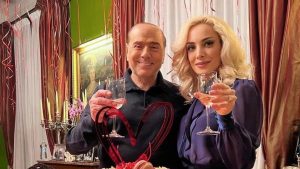 The figure on the right is not a drag queen but is in fact the 32 year old ‘wifelet’ of the 86 year old Silvio (left).  It is a love match.

Martina Fascina not only has a drag name, but is now the MP for Marsala in Sicily.  Marsala is a place she has never been to, except perhaps for a holiday when she was a child.  The electorate of Marsala voted her in in a first past the post election with a whopping 33% of the vote.  Obviously she was standing for Silvio’s Forza Italia party which nationally got around 8%.    She doesnt have a criminal record, unlike her partner who got elected to the Senate with 42% of the vote in Monza, where he happens to own the football team.   Bear in mind that Silvio has various court cases going on at the moment, but will now have parliamentary immunity as soon as he gets sworn in.  He’s aiming, apparently, to be President of the Senate – which will be a grotesque message to send the world, but wholly in keeping with the Italian mentality of happily voting criminals into positions of power.  As of today we have 40 ‘unpresentables’ in the new parliament, more than half belonging to the Lega and ruling Fratelli d’Italia.   An example for the Italians of what to expect in the next 18 months or so.