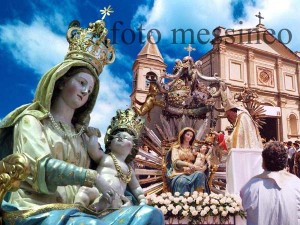 Picture the scene – Calabria 2014 – to be precise the small comune of Oppido Mamertina  in the hills above Goia Tauro in one of the most ‘Ndrangheta controlled areas of Calabria.  Its the Sunday of the ritual of the Madonna who is taken out of the Church for a walk round the town – and everyone gets excited.   This year,  its only 2 weeks since the Pope excommunicated all mafiosi and called for change in the criminal societies.  In Oppido the statue of the Madonna is escorted by the priest and bishop, the council member and the carabinieri.  All goes well till they get to the house of a 80 odd year old Boss under house arrest, where the statue stops and makes the inchino – a dip or curtsey of respect.   The Maresciallo of the Carabinieri feels himself in a difficult position at this point and orders his men to leave the procession – and not have anything to do with it.  They obey, and the priest, the council members ignore him and carry on their little procession.    All well and good except that the media get to know about it, sppecifically a journalist from the left wing Fatto Quotidiano.

Now the bubble bursts.  200 prisoners refuse to go to mass because ‘whats the point if we are excommunicated’. – Fair enough, I say, dont go, stay in your cells and shut the f?gt up.

The priest and his horde of craven succubi tell the congregation yesterday to give the journalist a good slapping, which they proceed to do.

Another fine example of the Church being less than the sum of its parts.