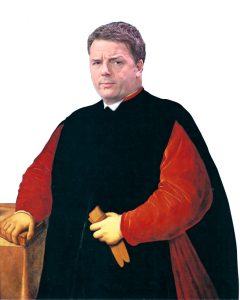 The great schemer of his age makes Berlusconi look like an amateur.   Now we learn that matteo Renzi, he who says that the Saudi Crown Prince wasnt responsible for the killing of Khashoggi (only verifiable if Renzi himself were responsibile),   met the 007 Mancini in a car park.  Salvini also met Mancini in the same period, and Renzi and Salvini are getting very chummy and wanting a reform to the justice system to suit their ends.   Just to top off this particular cake, a cassette tape has become public after 7 years, of Berlusconi sitting in the Democratic Party headquarters – the seat of the great Nazarene pact as it became known – and gives the exact date of the fall of the Letta PD government and the date when Renzi would take over as PM.        Matteo’s machinations know no bounds.  He makes Andreotti seem like a mild bumbling fool.