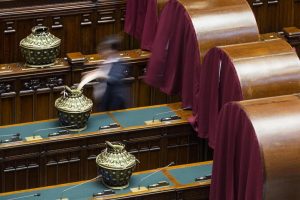 Yesterday Berlusconi withdrew from the Presidential race – ‘for the sake of unity’ and went immediately to hospital to stay in his palatial suite away from tricky questions to undergo ‘tests’ for a few days.  Today the great charade of electing a new Presidents starts, and this afternoon the chambers of parliament will host the first vote.   The only problem is there are no candidates.  It is now a foregone conclusion that all the parties will submit ‘white slips’  – blanks – meaning it is a complete waste of time.

All we know is who is not acceptable.  Draghi is not wanted by the right.   Salvini wants it to be his choice and will present a list of names.  The left will present a list of names.   The only name which could be presented at the moment is a bloke no-one has ever heard of, but the Vatican would be thrilled if he got the gig.   Renzi is doing somersaults trying to be important and kingmaker.   Everyone says it would be lovely if Mattarella did another term and he may well get the votes, but he has been very clear in saying he has no intention of spending another 4 years in Rome, and has already gone home to Palermo.

Casini would love it, but is a bit out of favour at the moment – he doesnt say anything and by the 7th vote he may win just of out desperation.   A long list of people who get huge pensions but do jobs nobody has ever heard of are in the running but not official candidates.     Meanwhile everything else grinds to a halt while the 1000+ ‘grand electors’ spend hours casting secret ballots one by one.  A more pathetic show of ‘democracy’ would be hard to find.